skip to main | skip to sidebar

To nourish your mind as well as your body

Anger and intolerance are the enemies of correct understanding.
-Mahatma Gandhi

When Siddhartha awakened from his seven days of fasting and meditation, he was emaciated and very weak. A girl named Sujata from a nearby town came to him and gave him a bowl of madhupayasa in offering, believing him to be a deva - a spirit of the Pipul tree. When he told her that he was not a deva, she still insisted that he eat and drink to recover his strength.
Madhupayasa comes from the sanskrit words madhu (honey) and payasa (milk rice).

Directions:
Prepare the Coconut Treacle Mix-
Pour the treacle into a pot and bring to a boil while stirring.
Add the Coconut and mix well.
Take off the heat.
Add pinch of salt and the cloves, mix well.

Prepare the Milk Rice-
Put rice and water into a pan and bring to a boil.
Cover and cook for 15 minutes.
Add coconut milk and Salt.
Stir with handle of wooden spoon, cover and cook on low heat for another 10-15 minutes (until the milk has been absorbed).

With both parts made, divide the slightly cooled milk rice into two portions.
On a flat dish, evenly spread out a layer of milk rice using one portion (should be at least 1cm thick).
Then evenly spread the coconut treacle mix on top.
Cover it completely (including from the sides) with the second portion of the milk rice. It is important to do all this before the milk rice cools down too much as it will become too sticky to handle. When it's cooled, cut the rice concoction into blocks. You can serve this with slices of banana, mango, or strawberry, or just eat it plain.
Posted by Irenicineri at 2:02 PM

Find me on FoodBuzz!

Irenicineri
I was once a country girl, who now lives mostly on her own in a city far away from home and family. I love horror films, health food, and helping other people find their smiles.

Irenic: adj. favoring, conducive to, or operating towards peace, moderation, or conciliation.

peace. it does not mean to be in a place where there is no noise, trouble, or hard work. it means to be in the midst of those things and still be calm in your heart.

"I just love food." - Gram
"Friendships are like pears. They ripen at their own speed and you never know when one will suddenly be deliciously sweet just when you need it the most." - me
"This is why I love to make up recipes: if it doesn't work out the first time, you get to eat the results and try again." - me 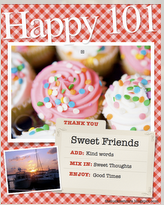 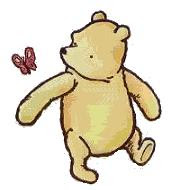 “A little Consideration, a little Thought for Others, makes all the difference.”